Our clients utilize PCAnywhere for their support issues. I’m running Vista – so when I tried to load our licensed client, I was swiftly met with an incompatibility message and the installer quit.

In visiting the Symantec site, they of course fixed the compatibility issue with an opgradering to version XNUMX. The snag? You have to pay $XNUMX for the upgrade. I have to have it, so I paid the $XNUMX. Paying $XNUMX for an application to simply work after you paid the initial licensing before is really enough to make you angry.

Now that I have XNUMX loaded up, I’m having tons of problems with it. The app appears to be running if I look in Task Manager, but the window is nowhere to be found. And if I do get the window up, it’s totally blank. I started researching the issue in the Symantec forums. One note I found was a great article on the Symantec Autofix program. 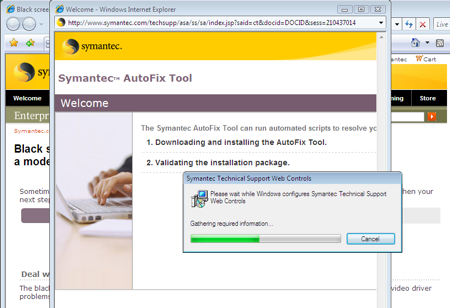 What kind of software company writes a program that fixes issues that affect their original program? I guess Symantec would be that company.

Hey Symantec: If you know what the problem is and how to fix it, put the fix in your original application!!!

After installing the Autofix program, PCAnywhere still continues to have issues. I cringe when I have to use any Symantec program… I’ve been writing about them for too long.